August and September 2019 marked the first months since January that housing activity in California produced positive trends – but that’s where the good news ends.

California building permits issued have consistently declined each month in 2019 compared to the prior year – until now.

September 2019, in particular, revealed 10,586 total single- and multifamily units in California, which is the highest volume of residential units issued in a single month this year.

But this is where the good news ends. Two consecutive months of increased permit issuance cannot make up for six months of “slowing down.”

September is showing a little over 81,000 total cumulative housing units issued over the past nine months, but in September of 2018, over 92,000 dwelling units as been issued, which indicates an 11% decrease year-to-date.

Check out the 2019 vs. 2018 comparison of total units issued monthly in CIRB’s chart below: 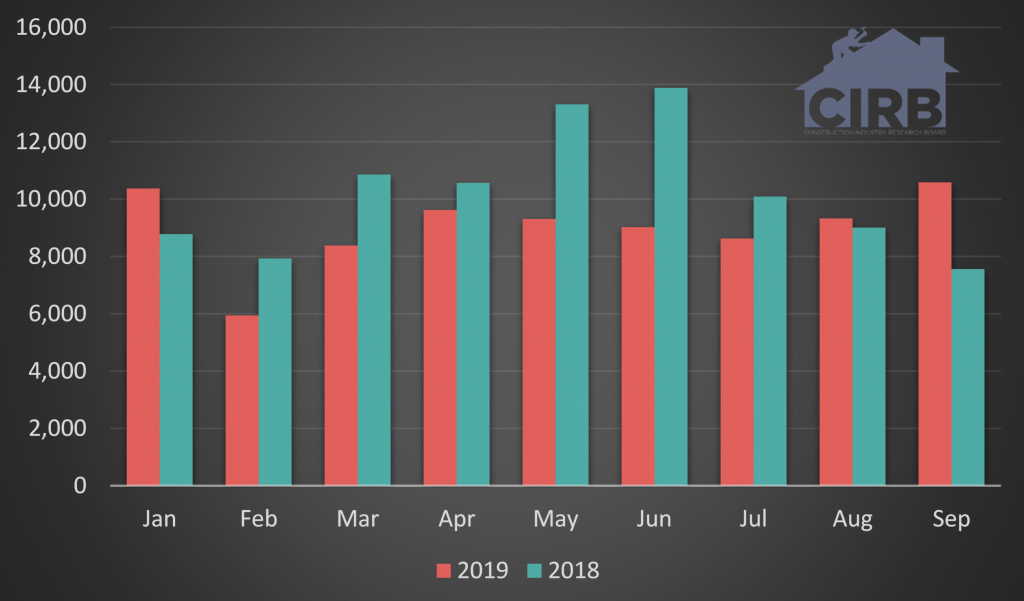 It’s also interesting to note that even with total housing unit statistics up in September, the dollar volume (permit valuations) of residential building – both new and existing structures – is down 14% from 2018. Commercial valuations are down 3% year-over-year as well.

Although statistics are catching up in the third quarter of 2019, the question remains if California can permit 36,685 additional units by the close of the year to beat the 117,892 total units issued in 2018. (That’s an average of 12,228 total statewide units needed per month for the next 3 months!)

Will the code changes taking effect on January 1, 2020 make an impact on permit activity? Or is our state headed for the first total housing unit decrease in a decade?

Download the September 2019 California Construction Review or email chf-cirb@mychf.org to get on the permit report distribution list.